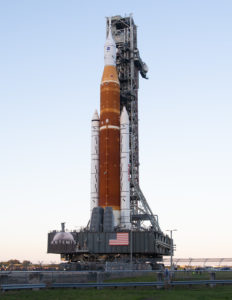 NASA’s Space Launch System (SLS) rocket with the Orion spacecraft aboard is seen atop a mobile launcher as it rolls out of High Bay 3 of the Vehicle Assembly Building for the first time to Launch Complex 39B, Thursday, March 17, 2022, at NASA’s Kennedy Space Center in Florida. Photo Credit: (NASA/Joel Kowsky)

The US Space & Rocket Center is hosting a free public viewing party for the launch of Artemis I next week. This history-making launch is scheduled to happen the morning of Monday, Aug. 29, and everyone is invited to watch! Doors open at 5:30 a.m.

We’ll be showing the Artemis I launch on the giant video wall in the Davidson Center for Space Exploration. This means we’ll be celebrating the launch of NASA’s mission to return explorers to the moon while standing beneath a Saturn V rocket – the rocket that took the first astronauts to the moon in 1969!

Artemis I is being carried by the Space Launch System – NASA’s most powerful launch vehicle. The SLS was designed to bring astronauts, robots, and supplies to the moon for the first time in more than 50 years. This heavy-lift launch vehicle is reconfigurable so that in the future, it can enable NASA to take on missions to other destinations like Mars. The Orion crew capsule will ride atop this giant rocket, bringing its total height to 322 feet tall.

Artemis I is an uncrewed mission that will be traveling farther than any spacecraft built for humans has ever flown. After launch, Artemis I will orbit the Earth before spending two days traveling to the moon. Once there, it will enter a distant retrograde orbit that will take it 40,000 miles beyond the far side of the moon.

Over the course of 42 days, the Artemis I mission’s Orion crew capsule will travel 1.3 million miles before splashing down in the Pacific Ocean off the coast of San Diego on October 10. The ship’s reentry will be faster and hotter than any spacecraft has ever experienced returning to Earth!

Though no humans will be on board this trip, the Orion Capsule will be carrying Commander Moonikin Campos, a mannequin wearing the Orion Crew Survival System suit. Moonikin is equipped with sensors collecting data on what future human crews might experience.

Artemis I will also be carrying several science experiments, Apollo artifacts, and a stuffed animal of Snoopy. Snoopy will serve as the mission’s zero gravity indicator and will float through the crew capsule once the spacecraft reaches the microgravity of space.

We invite everyone to join us at the US Space & Rocket Center on Aug. 29 to celebrate this momentous launch!