Space Camp’s 40th Anniversary celebrates the past and the future! 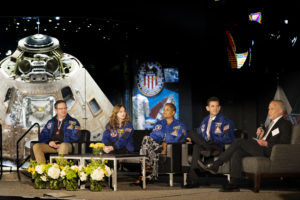 The US Space & Rocket Center celebrated Space Camp’s 40th Anniversary on Friday, June 17! It was a day filled with amazing guests, new Hall of Fame inductees, and a grand announcement about the future of the Rocket Center.

The day began with a special press conference in which Rocket Center CEO Dr. Kimberly Robinson welcomed the crew of SpaceX Inspiration4, the first all-civilian crew to go to space.

The Inspiration4 mission raised almost $250 million for St. Jude Children’s Research Hospital during a fundraiser before their flight on September 15, 2021, aboard a SpaceX Dragon capsule. The four-person crew had also made a visit to the U.S. Space and Rocket Center before their flight to meet with campers and talk about their mission.

Following introductions, Dr. Robinson was honored to announce that Isaacman was making a $10 million donation to support Space Camp programs – the largest financial gift in our museum’s history!

The money will be used for a new Inspiration4 Skills Training Center. The planned concept will be a 40,000-square-foot, state-of-the-art hangar-style building featuring space and aviation simulators, an aquatic center, a netted drone space, classrooms, and a challenge course designed for the training of future astronauts, pilots, and engineers! A highlight of the new facility will be the display of an L-39 Black Diamond plane Isaacman is also donating to the Rocket Center.

“We have much to celebrate about our past, but today we are looking to our future for the next 40 years, and we can do that because of partners who invest in our vision and mission, and we have such a partner in Jared and his crew,” Dr. Robinson said.

The Inspiration4 crew also presented Space Camp with a signed flag bearing the mission emblem to be displayed in the new facility, noting that it was flown “past the International Space Station, past the Hubble Telescope, the farthest that humans have been in space for more than 20 years.”

“There are things here you will not find at school, you will not find at your local museum, your computer, your iPad, or your virtual reality headset will never be able to provide,” said Isaacman. “What you’re seeing here at Space camp is a lot of young minds that will someday go on these missions. The Inspiration4 Skills Center is one step along that journey. Space Camp might be located in Huntsville, Alabama, but it’s an asset for the entire nation.”

Friday evening, Space Camp held a Space Camp Hall of Fame Induction Service and Dinner program beneath the Saturn V rocket in the Davidson Center for Space Exploration. Hundreds of past Space Camp attendees, Hall of Fame members, donors, and friends of the Rocket Center were in attendance. 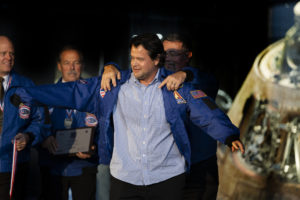 The 2022 Hall of Fame inductees were the Inspiration4 crew members: Isaacman, Sembroski, Arceneaux, and Dr. Proctor.

Following the induction ceremony, TIME magazine Editor at Large and long-time friend of Space Camp Jeffrey Kluger led a panel discussion with the Inspiration4 crew. The crew members shared their thoughts on the Inspiration4 mission, the importance of Space Camp, and the future of space exploration.

After topping off the evening with 40th Anniversary cake, the incredible day came to an end with the promising future of Space Camp on the horizon!